We’re a dedicated team of in-house editors, writers and researchers who are passionate about helping businesses find the answers they need.
On this page
Expand
Compare free telephone systems prices and save Get free quotes

Office phone system prices depend on the kind of office phone system you choose. Hosted VoIP systems, which we'd recommend to SMBs, tend to cost between £8 and £50 per user, per month, depending on how advanced and featureful your package is.

Meanwhile, buying a self-hosted VoIP system can cost around £600 to £800 per employee, and analogue office phone system prices start at around £99 and reach over £900.

All that said, we know how difficult it can be to find the most accurate prices for your business. We can help you cut out hours of research by bringing bespoke quotes straight to you with our free quote-finding tool. Simply answer a few questions about what you need, to hear from the best system providers for you with totally tailored, no-obligation quotes.

For a top hosted VoIP system, you'll need to pay a few things:

Let's break these prices down.

Most VoIP phone software is charged on a per user, per month basis. And while some providers charge a set fee for the entire software package, others limit the features you can use depending on the price you pay.

While we’ve provided you with a rough guide below, it’s best to get in touch with individual suppliers to know what’s included in each of their packages. Our price comparison service makes it really easy for you to do this. Just provide us with a few details about your business, and we’ll send you the best suppliers for your requirements.

Sometimes, system providers charge a configuration and installation fee, which covers the cost of an engineer helping you to get everything set up. This fee is usually in the region of £250 for half a day.

That said, one of the perks of hosted VoIP is that it's very easy to set up – often, it's just a case of installing the right apps and connecting up any IP phones. So you'll often find that hosted VoIP providers don't charge any installation fees, because they expect you to do it yourself.

The price of an VoIP phone system handset varies depending on the specification of the phone you need. Although all VoIP phones (also known as IP phones) will enable you to make full use of the features of your VoIP phone system, cheaper handsets won’t be as intuitive to use as more expensive models.

Below, we’ve provided you with some guideline prices:

▶ Read more: what is unified communications and why does it matter?

You’ll also need to consider the cost of an internal or external tech team to install and configure the system. These prices will vary depending on the size of your business and the phone system features you need.

For example, Asterisk sells free software that can turn an office computer into a dedicated onsite telephone system host. The expense isn’t in the software, or even in the server/dedicated computer, it’s in the technical team that will need to build your telephone system from scratch and maintain it.

▶ Read more: PBX telephone systems: everything you need to know

While BT plans to start switching off the landlines by 2025, analogue phone systems are still a decent short-term solution. And with many landline phones now coming with IP capabilities (the ability to connect to the internet), analogue phones need not be a wasted investment.

Of course, we'd always recommend VoIP phone systems instead. They're cheaper, easier to install and scale, and come with many more call management and unified communications features.

But if an analogue phone system just makes more sense for you right now, let's explore the prices.

For an analogue business phone system to offer optimum functionality, it’ll need either a PBX (private branch exchange) or a key phone.

The difference between a PBX and a key phone is that, while a PBX digitally sends a caller to the right handset via an auto-attendant, a key phone uses a light system to display when a line is busy, enabling the right person to pick up the call.

To give you an idea of costs:

It’s worth bearing in mind that key phones aren’t as scalable as a PBX, so spending more on the off-set may mean that you won’t have to pay as much in the future.

If you’re thinking that your business doesn’t need that many phones, you can always look into a multi-line phone system.

These consist of a number of phone lines, plus two to 10 handsets, but don’t offer the same call handling features, such as an auto-attendant.

Panasonic offers six-handset multi-line phone systems from £99, and BT will usually install a new landline for around £250. This means that expanding to a two-line phone system with six handsets will cost you around £350.

What should I do next?

Why not get an exact price for a phone system by using our cost comparison service? All you need to do is provide us with a few details about your business, and we’ll match you with the best phone system suppliers for your needs. You can compare prices, talk to suppliers, and gain a better idea of the phone system you should be investing in. 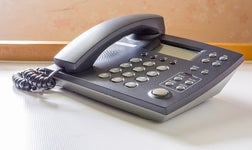 A Guide to GSM Desk Phones 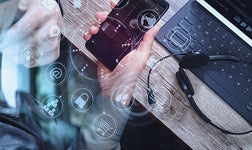 The 11 best VoIP providers in the UK

How Does A Telephone Exchange System Work?

How to Report Telephone System Faults for Your Business

Lily Comms Review: Is it the Right System Right for Your Business?