But what else does TalkTalk's leased lines service have to offer? What are its weaknesses? And, perhaps most importantly, how much does it cost? Armed with extensive research, we put TalkTalk under the microscope to answer these questions and more. In this review, you can find out whether it's the right leased lines provider for your business.

You can also try our free quote-finding tool to compare tailored, no-obligation quotes from the best leased lines providers for you, including TalkTalk. It's fast, easy, and free.

The pros and cons of TalkTalk's leased lines

What are TalkTalk's features and benefits?

First off, let's take a look at the stats worth knowing:

So what are the best things about TalkTalk Business' leased lines service? Let's explore.

As UK telecoms giants go, TalkTalk has an excellent reputation among its customers. Where most leased lines providers achieve scores between one and three out of five on Trustpilot, TalkTalk Business has scored 4.4 – a rare feat in the world of telecoms. We'll explore some of those scores further on in this review.

So, what makes TalkTalk's customer support offering so good? Firstly, you'll have your own dedicated, UK-based account manager to deal with, and they'll be chosen for you based on how well they know your industry and understand your needs, which is reassuring.

You'll have access to support 24/7, every day of the year (though this is common among leased line services). It's also worth noting that TalkTalk Business doesn't operate on a reseller model, so all your customer support queries will be dealt with directly by the company.

If you experience an outage, TalkTalk is committed to responding within 30 minutes and delivering a fix within five hours for dedicated leased lines, or seven hours for EoFTTC or EFM lines. This matches the commitments offered by many other suppliers, so it isn't blowing anyone out of the water. But it's good to know that you wouldn't be waiting longer for TalkTalk than you would for anyone else, especially if you have a dedicated leased line (more on the specific line types and their prices later!).

You can scroll down to our section on TalkTalk's costs for all the details on this, but suffice it to say that TalkTalk's leased lines tend to be cheaper than those from BT, Virgin Media, and Vodafone.

Plus, TalkTalk says it's keen to keep its pricing as transparent as possible, assuring us that the price you're given is the price you'll pay – and if unexpected, unwieldy costs crop up during your site survey, you'll be given the option to cancel free of charge, which is a level of respect you don't often see.

You can't talk about TalkTalk without acknowledging that it boasts the largest network in the UK, with equipment in over 3,000 exchanges across the country. In fact, TalkTalk says its network is over 60% bigger than its nearest competitor's.

But what does this mean for your business? Generally, a larger network is a more accessible one. With TalkTalk's network being so large, chances are good that you'll be able to connect to it with minimal additional construction work and costs.

How much do TalkTalk's business leased lines cost?

TalkTalk's leased lines are among the most affordable on the market. Let's take a look at the company's price plans:

Swipe right to see more
0 out of 0
Did You Know?

TalkTalk is currently offering a free backup EoFTTC line worth £3,500 if you sign up for a dedicated leased line – so if your line does go down, you'll still have a connection. NB: This offer isn't available when you buy a 10Gbps dedicated line.

While leased line installations can be an expensive business, TalkTalk's are actually often free. Free installation is available with the following plans:

However, when installation fees are charged, TalkTalk doesn't clarify how much they'll be (often, it's subject to your location and other factors).

That said, we know that TalkTalk does aim to make pricing as transparent as possible once you've started the setup process. If any unexpected costs rear their ugly heads as a result of your site survey, TalkTalk promises to inform you of them as soon as possible, giving you the option to continue at cost or cancel free of charge. We see this as a breath of fresh air in an industry where businesses are, sadly, at risk of being charged expensive one-off fees weeks into their installation.

If you'd like to find out exactly how much a leased line would cost for you, look no further. Our free quote-finding tool can put you in touch with the best providers for you – including TalkTalk Business, potentially – who'll be in touch to provide tailored, no-obligation quotes and answers to your questions, so you can compare easily and start saving.

Is TalkTalk right for my business?

“I run a small business”

TalkTalk is definitely worth investigating. In fact, in our guide to the best leased line providers in the UK, we recommend TalkTalk as our top pick for small businesses!

Its affordable pricing makes it a relatively cheap option for small ventures, particularly those that don't actually need a huge amount of bandwidth – if 10Mbps is fast enough for your small team, you can pay as little as £90 per month.

There's also the fact that TalkTalk Business' customers speak very highly of its customer support (we'll explore what they say in the next section!). When you manage a small business that's new to a particular service, solid technical support from your provider can prove invaluable.

“I run a large business”

TalkTalk's leased lines service is targeted towards businesses with up to 100 employees, so if your team is climbing above that number, you might want to look elsewhere.

“My business isn't based in a major city”

Sometimes, being based in a more rural part of the UK – or even simply not being close enough to a major city – can prove problematic when it comes to connecting up a wired leased line, as the necessary infrastructure might not be in place. However, TalkTalk's network is the biggest in the UK, which means it might well be able to provide connectivity in your area. It's worth investigating!

What do TalkTalk's customer reviews say?

As we've already mentioned, TalkTalk Business has one of the best reputations we've seen among telecoms customers. To give you a flavour of what its customers think, we've scoured the web for the most helpful reviews.

The vast majority of reviewers (73% of those on Trustpilot, in fact) give five-star ratings, and call out the helpfulness and speed of the people they've dealt with at TalkTalk:

I contacted TalkTalk Business today to change my broadband provider. I am extremely happy with the service I received. The sales adviser, Anthony Ford, was polite, friendly, and made it very easy to make the switch. I was fully informed of the deals available and the process I will be going through. Thank you.

Karolina was really helpful and expedited the line repair because it was a business line. The problem was immediately diagnosed as being in the exchange, and the fault was rectified within a couple of hours. Very good!

But we did also note this reviewer, who said they had trouble when their contact was away:

James McDonald acted professionally on the initial consultation when quoting for the new job. But I was very disappointed that, in his absence, there is no facility for someone to monitor his emails, especially when a customer needs to speak with him.

And this reviewer, who experienced problems with their direct debit:

They canceled our direct debit for the service. We didn't notice. The first month, they mailed, and we paid manually and asked them to reinstate the direct debit.

The second month, the direct debit was again not presented, with no communication. They cut off our 1Gb leased line, and said even after our card payment via the website that it'd take 72 hours to fix (even though the SLA is four hours). Thankfully, it came back on after an hour.

Month three. The direct debit was not presented at our bank. After 30 minutes on chat with a support person, they finally confirmed that the amount was paid and we'd not be cut off this month. Looks like I have to do this every month.

That said, based on the mass of customer reviews available online, it seems that issues like the above are rare. It's also worth noting that TalkTalk responds to all Trustpilot reviews, offering next steps to solve any issues.

We consider TalkTalk Business one of the best leased lines providers for good reason. Its leased lines are among the most affordable on the market, and it commits to being as transparent as possible about its pricing. It also boasts mostly fantastic customer ratings and reviews, which is quite impressive in the world of business telecoms.

Add to this the fact that it offers free installation on certain 36-month contracts, but also offers 12-month contracts for those who don't want to commit for so long, and it's no wonder why TalkTalk Business is our top leased lines provider for SMBs.

Want to find out whether TalkTalk is a good match for your business? Use our free quote-finding tool to get matched up with the best leased lines providers for you. They'll then be in touch directly with tailored, no-obligation quotes and answers to your questions. It's a quick and easy way to compare and save.

What is a leased line?
A leased line provides a dedicated, private, high-speed internet network for your business (and only your business) to use. They're often used to connect multiple business sites to one network, but they can also prove useful for internet-reliant businesses that only have one location. A leased line is an alternative to traditional business broadband, which is much slower and less reliable, but also a lot cheaper.
Are leased lines good?
Yes! Leased lines have plenty of pros:

The only notable cons of leased lines are that they're much more expensive than business broadband, and they take much longer to install.

What's the difference between ADSL and a leased line?
ADSL stands for asymmetric digital subscriber line (or loop). Like leased lines, it's a means of transmitting data. However, in the case of ADSL, data is transmitted via the traditional copper landline, rather than via fibre optic cables or radio signals. ADSL is currently the primary form of broadband in the UK.
Save by comparing free leased line prices
Do you need a leased line for your business?
Yes No
Just answer a few questions – it only takes a minute 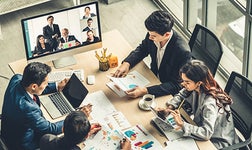 The Best Leased Line Providers in 2022

Leased Lines Explained: Does Your Business Need One? 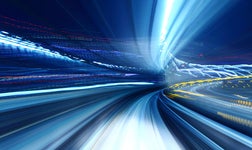