We’re a dedicated team of in-house editors, writers and researchers who are passionate about helping businesses find the answers they need.
On this page
Expand
Compare free franking machine prices and save Get free quotes

Written by Sabrina Dougall
On this page
Expand

Buying a franking machine is cheaper in the long-run but renting offers more flexibility for growing companies.

If you've noticed an uptick in posted products and marketing mail in your company lately you're probably eyeing up a franking machine already. But how should you know whether or not to take the plunge and make that purchase?

In this article we'll weigh up the pros and cons to ensure you know which option is the best for your company.

To rent or to buy a franking machine?

Franking your mail will reduce costs and improving productivity. You already know that obtaining a franking machine will boost office efficiency and save valuable employee time. So the question isn't so much whether your company should get one, but how to pay for it.

As a business, you have two options:

Option one is often the more tempting, especially for small businesses, as you avoid having to pay a large upfront sum. But in the long run this can prove a false economy as contracts drag on and hidden charges crop up further down the line.

The fact is that, on balance, the advantages of buying a franking machine far outweigh the perceived disadvantages for most businesses. Here’s why…

Advantages of buying a franking machine

There are three main advantages that buying holds over renting

When you enter into a rental agreement you never can be entirely sure of the costs. You know what you’re going to be paying on a monthly basis, but this rarely tells the whole story.

Many franking machine suppliers will draw you in with a juicy looking low monthly rental charge, then slap a big fat add on to your bill after you’ve signed a contract. Hidden charges can include a sign up or ‘documentation fee’, maintenance costs, and delivery and installation fees.

When you buy a franking machine outright, you can have peace of mind that there won’t be any additional charges from your supplier further down the line.

✔ No restrictions on supplies

The second reason is to do with the day-to-day running of your franking machine. Let’s say that you run out of ink. You go online and find an off-brand ink cartridge priced at £35.50. The trouble is, it’s written into your rental contract that you can only use Quadient's official cartridges and those cost twice as much!

Using a cheaper ink cartridge would void your warranty, so you have no choice but to fork out the extra money on premium ink.

✔ It’s cheaper in the long run

As with most things, the deciding factor for businesses choosing between renting a franking machine and buying is often cost. And in this respect, buying is again the better option.

A basic franking machine will set you back in the region of £1,000 or around £20 a month to rent. So, after four years renting you will have paid for the cost of the machine. Everything after that is pure profit for the supplier.

This may not seem like such a bad deal, but if you’ve seen a franking machine up close you’ll know they’re built like a tank. After the nuclear apocalypse it will just be the cockroaches and franking machines — and you’ll still be paying off rental on yours. In the long run, it pays to buy.

But if you’re struggling to justify the upfront cost of buying a franking machine new, there are plenty of suppliers that offer used franking machines for as little as half their original price.

Save by Comparing Franking Quotes from Leading Suppliers
Do you already have a Franking Machine?
Yes No

Why buy a franking machine?

Do you want to keep postage costs to a minimum? Do you want to save time and avoid the drudgery of manually processing mail? Of course you do! And, in a nutshell, that’s why you should buy a franking machine.

But the extent to which your business stands to benefit from buying a franking machine will depend largely on the volume of mail sent. As savings are cumulative, a large business that posts 100 letters a day will save more money than a small business that only sends 50.

Should my small business buy a franking machine?

Small businesses essentially have two considerations when buying a franking machine: the price of the machine and the return on investment in terms of productivity.

If you’re sending fewer than 100 letters per day, you should pay no more than £1,600 for a franking machine. Any more than this and it will take a lifetime to make up the cost in savings.

In terms of productivity, the benefits of buying a franking machine can be big, especially when looked at over a period of a few years. It's about automating dull, repetitive tasks to free up humans to carry out more complex (and valuable) duties.

Should my large business buy a franking machine?

There’s no two ways about it, franking mail saves large businesses thousands of pounds, in both reduced costs and reclaimed man-hours. If you’re sending out more than 100 items of post a day you’d be crazy to do it the old fashioned way. So it’s not so much a question of “Should my large company buy a franking machine?”, but rather “What's the best franking machine for my company?”

If you'd like further guidance about choosing a franking machine for your business, take a minute to tell us what you need and we'll ask our trusted suppliers to get in touch with you directly.

How much does a franking machine cost?

At this point you may well be wondering: “How much is a franking machine?”

Here’s a rough idea of pricing:

Request Free Franking Quotes from Trusted Suppliers
How much post does your business send every week?
Under 500 items More than 500 items
It only takes a minute

It’s important to be realistic about the volume of mail you’ll be sending and choose your franking machine accordingly. A cheap franking machine designed to process low volumes of mail won’t last long if overworked — and repairs are pricey.

Ways to buy a franking machine

There are a few different ways to buy a franking machine. The best way for most people would be to go through the manufacturer directly, review product specs and agree a price over the phone. Speaking to a sales rep directly is a sure-fire way to get the best price (particularly if you make it sound like you'd rather go elsewhere if they don't offer you a good deal).

If you can afford to purchase your machine outright then you should. While it's possible to rent a franking machine, buying it outright is cheaper in absolute terms. If you buy an up-to-date model you're less likely to run into problems with needing to replace worn parts.

You can go direct to manufacturers or look up trustworthy third-party suppliers. Examples of the latter include Mailcoms, Totalpost, Mailserve Ltd, The Franking Machine Company and Digital Solutions Ltd.

It's perfectly possible to buy a second-hand machine, though you should exercise caution, particularly if you pick up from a private seller on eBay, for instance. Resist the temptation of a low initial cost price if it means higher maintenance and repairs costs because you picked up a dodgy machine.

Manufacturers and office equipment shops sell reconditioned machines. Your best bet is to choose a reconditioned machine from the machine's original producers, as it's an easy way to slice roughly £1,000 off the list price. Check your contract carefully for conditions relating to repair and warranty.

Next Steps: How to get a franking machine

Save yourself the time, money and frustration of searching out the best franking machine deals by taking advantage of our free quote requesting service.

Simply fill out our form and we’ll match you with leading franking machine suppliers, who will provide quotes tailored to your specific business needs.

It only takes a minute, and you could be automating your mail operations by next week.

Sabrina writes about tech for business as well as consumer software. She covers topics ranging from digital marketing to ecommerce fulfilment, security systems, franking machines, and more. Having run her own successful small business, Sabrina knows first-hand how much there is to keep on top of. Writing with your company’s needs in mind, she distils truly useful product information (without the sales pitch).

Is franking the cheapest way to send a letter? 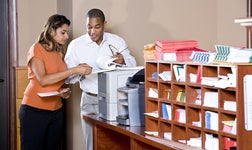 6 Best Mailroom Equipment: What Does Your Office Need?

How To Do Recorded or Special Delivery On a Franking Machine