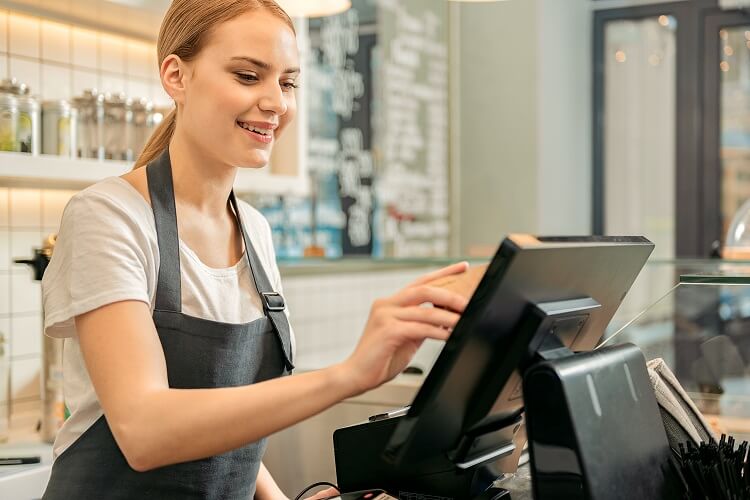 By Aimee Bradshaw | Writer and researcher

Want to know the best retail EPOS systems for your business? Scroll down to find out!

How do you choose the best retail EPOS system for your business?

Choosing the best retail EPOS system for your business is actually pretty hard. There are lots of things to consider, including software features, credit card fees, hardware, whether you need a separate merchant account, and of course, the costs involved.

The software features are probably the most important factor. On the face of things, the majority of POS software is pretty similar. You can take payments, manage stock, and even view sales stats. It’s the additional features that really make a POS system stand out from the rest.

Think integrations – perhaps with a booking system, an accounting system, or a customer relationship management system (CRM). You may also want to consider whether a POS system can integrate with an ecommerce site – this is essential if you’re looking to take your business online.

If you’re unsure where on earth to start, we’re pleased to say that your search can begin right here. We’ve researched the best retail EPOS systems, and have even suggested which POS system is the best for each retail sector.

So, whether you own a clothing store, a grocery store, a newsagents, a beauty salon, or even a chain of supermarkets, discover the best point of sale system for your business by scrolling down, or clicking on the links in the menu below.

Shopify is well known in the ecommerce website scene. In fact, since its humble beginnings as a snowsports startup, the ecommerce giant has processed over $1 billion in sales globally – impressive! However, cyberspace was never enough for Shopify; it wanted to make its mark in the retail POS market, too. And boy, has it.

Shopify’s system is compatible with a range of hardware, so you may not need to invest in an entirely new system. And even if you do need (or want) to invest in a new system, it’s Star mPop system – which consists of a cash drawer with a built in receipt printer – will get you on your way for as little as £379.

Its software comes with a vast array of features that are ideal for a clothing store. These include:

Vend offers a highly versatile piece of kit. In fact, it’s not just great for grocery stores – any small store, whether you sell outdoor gear or bottles of wine, will benefit from a Vend system. Vend is actually a relatively new player on the scene, but that hasn’t stopped it from having a point of sale system in over 25,000 stores, and gaining solid review ratings across the web.

Vend’s system is compatible with a wide range of hardware. In fact, you can use its online tool to find out whether you need to replace your existing hardware. And if you do, you can purchase a cash drawer, receipt printer, iPad stand, and barcode scanner for just over £400.

When it comes to features, Vend excels. It offers a complete store management system, complete with the following benefits:

Serving over 30,000 businesses across the retail and hospitality sectors, EPOS Now is fast becoming one of the UK’s most popular retail POS suppliers. It’s a simple system with an intuitive interface, making it ideal for newsagents looking to adopt an easily integratable, yet modern retail POS system.

The great thing about EPOS Now is how it enables you to build your own POS system through its AppStore. The base system is compatible with over 100 specialist apps, so you’ll never have to pay for features that you won’t make use of. If you’re not too keen on using an iPad as a cash register, EPOS Now offers a robust touch screen terminal, which you purchase alongside the software, printer, and cash drawer for a one-off fee of £1,200.

Square is one of the biggest names in the POS game. Not only does it offer a leading credit card processing service, but it offers its own POS system, too. Square is very clued up on software features – in fact, one of its best selling points is that it can integrate with sophisticated salon booking software, in addition to being a great system through which to take payments.

We think Square’s biggest selling point is the fact that its software is available completely free. Yes, you read that correctly.  For absolutely nothing, you can benefit from a whole heap of features that’ll enable you to manage your salon from front to back. There is one catch, though – Square does charge a little more when it comes to credit card processing (1.75%), but that can still work out less than paying a monthly software fee.

Let’s see what’s on offer when you invest in a Square POS system:

While all the retail POS systems featured above do a great job on a smaller scale, EPOS Direct can handle the big retail operations. As a leading EPOS supplier with customers in over 23 countries, EPOS Direct is experienced in dealing with large corporate companies. Its retail POS systems are robust, and can integrate with a wide range of hardware accessories, including scales and barcode scanners.

The great thing about an EPOS Direct system is you can purchase everything for a one-off fee, meaning no monthly payments to worry about. Best of all, its software is completely scalable, whether you’re looking operate one supermarket or a chain of them. And to top it all off, EPOS Direct has earned a five star Trustpilot rating.

Its app features are as robust as its hardware, offering full-scale in-store solutions and extensive functionality. When you invest in an EPOS Direct system, you’ll be able to:

Choosing the right EPOS system for your retail business is a big responsibility, and ultimately, one of the biggest considerations is budget. While we’ve given you an idea of price, it is only that – an idea. There are other costs you’ll need to consider, such as installation, software add-ons, monthly credit card fees, and the hardware itself.

We always recommend that you speak directly with a supplier before you go ahead and order a system. That way, you’ll gain a true idea of how much a retail POS system will cost you.

Luckily, you can do that quickly and easily, just by filling in our online form. Once you’ve filled it in with a few details about your retail business, the best suppliers for your requirements will be in touch with quotes and advice – easy!

EPOS till rental
Popular Posts
We use cookies. By browsing our site you agree to our use of cookies.