We’re a dedicated team of in-house editors, writers and researchers who are passionate about helping businesses find the answers they need.
Compare free commercial waste collection prices and save Get free quotes

Fly-tipping is defined as ‘illegal waste disposal’, and it’s a big problem around the UK. In 2018/19, local authorities in England dealt with 1,072,000 fly-tipping incidents. That’s one every 30 seconds.

Sadly, fly-tipping is on the rise. In the last year, these filthy acts cost councils in England more than £12.9 million, which is £5,000 more than the previous year.

The type of illegal waste can vary greatly, from household to commercial, but the overall effect is the same: an unsightly mess that’s dangerous to animals and humans, and costly to local councils.

In this report, we lift the (bin) lid on the problem to find out which parts of the UK are the worst offenders, and to uncover which areas have become dirtier – or greener – since our investigation last year.

To calculate these figures, we compared the population of areas with the number of fly-tipping incidents up and down the UK, and the results are surprising.

Which are the worst areas for fly-tipping?

We’ll cut to the chase – the capital needs a clean-up. Londoners are still the worst offenders when it comes to fly-tipping, with six London boroughs featuring in the top 10 worst areas for the 2018/19 year. Check out our table of the top ten worst fly-tipping areas below…

Since last year’s study, Sheffield has experienced a 552% increase in fly-tipping incidents. In 2018/19, the South Yorkshire city committed 137 incidents per 1,000 people, compared to just 22 per 1,000 people in the previous year, climbing its way up the smelly pile from 54th place to the second worst offender in the country.

As mentioned earlier, the capital needs a cleanse. London Boroughs now constitute four of the filthiest five areas in the country, which is one more borough than last year.

The City of London retains the nation’s dirtiest crown at top spot, despite reducing its fly-tipping offences by 16% since last year.

You already know about shameful Sheffield in second place, but third placed Camden is no saint, with a 113% increase in fly-tipping since last year.

Hammersmith and Fulham has dropped down from 3rd to 4th, with a 10% decrease in fly-tipping incidents per 1,000 people, while Hounslow has entered the top five from position seven.

Great Yarmouth reduced its fly-tipping incidents by 75%, cleaning its way from the 5th worst offender, down to 83rd.

Should the capital get all the punishment? We pulled the top 10 worst areas outside of London to give you a wider view of the tipping epidemic.

Since 2018, Newcastle-upon-Tyne has increased its offences by a staggering 986%, going from seven offences per 1,000 people, to 77 in just a year, making it the third worst offender outside of London.

Other areas that have fly-tipped their way into the non-London top 10 include Sheffield, Rochdale, Sandwell, and Rotherham.

However, it’s the same old dirty story for Northampton, Plymouth, Southampton, and Redcar and Cleveland, remaining some of the worst offenders outside of the capital city.

Looking for waste management companies for your business?
Get Free Quotes

Which areas fly-tip the least?

To put that into perspective, the City of London commits 1,146 times more offences per 1,000 people than Ryedale.

Other areas that performed particularly well this year were South Lakeland, Sevenoaks, Scarborough, and Richmondshire.

Illegal waste disposal – i.e. fly-tipping – became a criminal offence in 2005. Fines are the most common type of punishment for fly-tippers, being given to eight out of 10 cases.

In the past year, English councils dished out £1,090,267 in fly-tipping-related fines, averaging at £3,355 per local authority.

However, there is huge disparity between the fines, with Birmingham collecting a whopping £175,643 in fines.

While only 0.2% of cases result in prosecution, some businesses and individuals have paid upwards of £90,000 in the past. In 2019, only 1% of perpetrators found guilty were given a prison sentence, while 1.6% were given community service.

It’s more difficult than ever for the authorities to find these perpetrators, particularly because organised criminals are posing as fake companies and dumping rubbish in hired buildings.

That said, it’s more important than ever that your business keeps up to speed on UK waste regulations, and learns how to stick to them.

For smaller incidents of fly-tipping that are considered non-hazardous, the result is more likely to be a fine of £150 to £400.

How are businesses contributing to the problem?

As a business owner, you have social and legal responsibilities to ensure that your commercial waste is disposed of properly.

How should businesses dispose of waste?

If you own a business, then you have a ‘duty of care’ when it comes to waste disposal. This means it’s up to you to make sure your waste is dealt with legally.

You must keep written information about your waste disposal for a minimum of two years. Furthermore, this information should all be readily available for inspection by the council or Environment Agency if the time comes.

If your commercial waste can’t get collected up by your local council, we recommend contacting a registered waste carrier. We’ve rounded up our pick of the top five waste carriers in the UK.

Of course, one way to make your waste disposal issues easier is to produce less rubbish! The planet, and your bottom line, will thank you for it. Keen to become greener? Read all our recommendations for how to make your business greener in 2020.

9 Ways to Make Your Business Greener in 2022 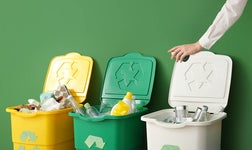 Confidential Waste Disposal: What are Your Options?

The Different Types of Waste Removal

UK Waste Regulations and How to Stick to Them 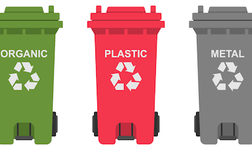 Business Recycling: How to Manage Your Commercial Waste Responsibly